Jan 26 - I mentioned last week that Fountain Hills was beginning to weaken. It is now lower than last month by 1%, but this did not stop it reclaiming the top spot. This is because Paradise Valley has also weakened over the past in the last week and by a larger amount. The high-end of the market is not participating very strongly in the increased demand that we are seeing for the mid-range and low-end. Cave Creek has also retreated in the past week. Scottsdale continues to increase but at a reduced speed.

The Southeast Valley is having a spectacular CMI recovery with Chandler up 43%, Mesa up 38%, Tempe up 25%, Queen Creek up 24% and Gilbert up 19%. Phoenix is also strong at 26% and the inner West Valley too, with Glendale up 25%, Avondale up 42%, Peoria up 20% and Surprise up 21%. Outer areas such as Buckeye and Maricopa are still improving for sellers, but more slowly.

The average change in the CMI over the past month is 20%, lower than the 22%that we saw last week.

Overall the market is more favorable to sellers than we expected in December and downward pressure on pricing has been largely eliminated, except in a few market segments.

The more favorable situation has started to bring more sellers into the market and new listings have been more plentiful over the last week. Overall supply remains well below normal and so does demand. Volume is low bur it is increasing and market health is improving, not deteriorating as it was for much of 2022. 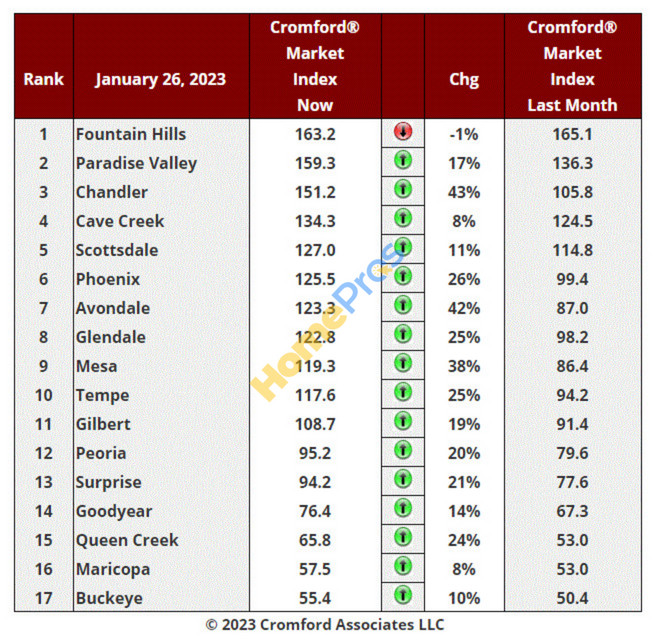 Jan 19 - As you can tell from all the green signals, this has been another week in which the balance in the market moved strongly in favor of sellers. The average change in the CMI over the past month is 22%, the same as last week.

Paradise Valley has moved ahead of Fountain Hills, which is beginning to weaken.

Fastest movers over the last month are Chandler (up to third place) Avondale and Mesa.

At 20% or above we have Peoria, Phoenix, Queen Creek, Tempe and Glendale, while Gilbert, Cave Creek, Scottsdale, and Surprise are above 10%.

Fountain Hills, Buckeye, Maricopa and Goodyear are below 10%. 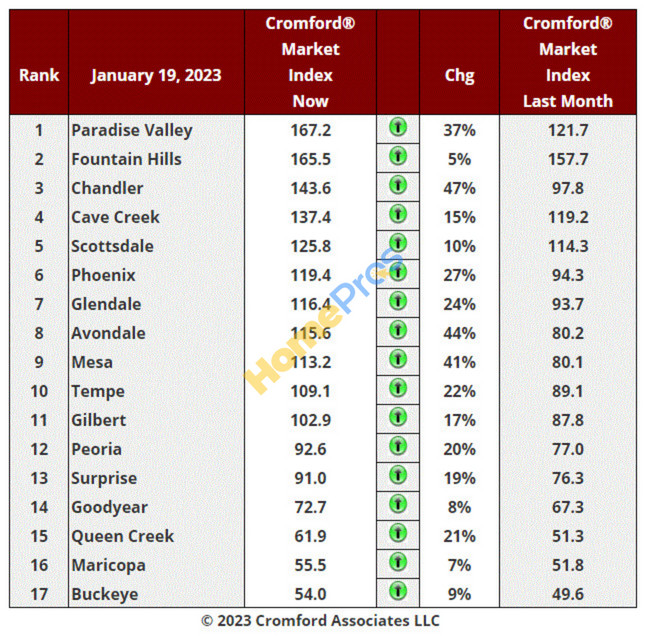 Jan 6 - The balance in the market continues to move strongly in favor of sellers. The average change in the CMI over the past month is 21%, up from 16.3% last week.

Paradise Valley is improving for sellers as an astonishing pace, with supply dropping and demand rising. Not far behind are Avondale, Chandler and Mesa, all up more than 30% over the past month.

Even though Goodyear is very late to the party, it has started to head higher within the last 2 weeks. To find a location that is still moving in favor of buyers we have to look among the secondary cities, where we find Sun Lakes, Laveen and Arizona City.

Four of the top five locations are all fairly expensive, but averagely-priced Chandler is also a seller's market and Phoenix and Glendale look like they will soon be in the same situation.

Confidence could be making a comeback sooner than expected. 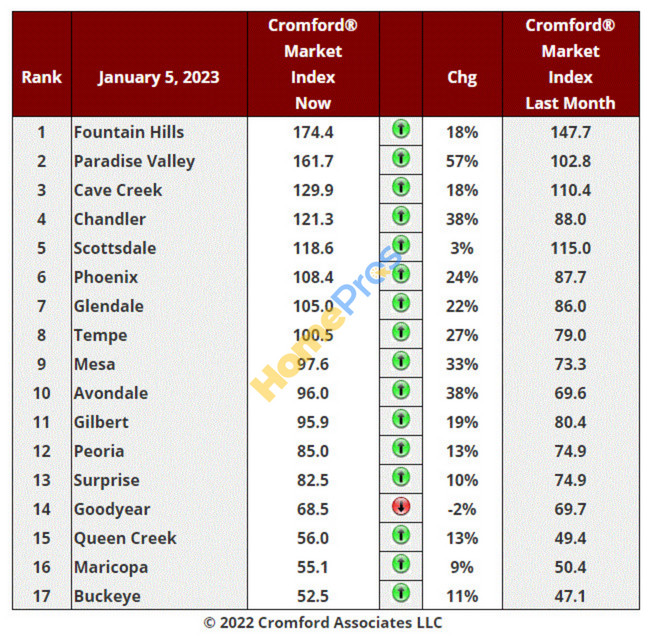 Dec 22 - This table is telling that the market is improving rapidly now, at least in terms of the balance between sellers and buyers. We now have 15 cities showing improvement for sellers over the past months and only 2 still deteriorating. Those 2 are Scottsdale and Goodyear.

This change is happening because new supply is collapsing. There have been only 4,875 new listings added in the last 4 weeks. This time last year we had over 7,000.

At the same time, demand is showing signs of life as buyers realize that they don't much like interest rates around 6% but they like them a whole lot more than over 7%. Sellers are also increasingly willing to help with rate buy-downs to make that initial hurdle easier to jump.

The bad news is that transaction volume remains very low. If you are hoping for much larger volumes, as many are, you will have to wait longer. However, it is clear that supply is dropping while demand is rising. That is usually welcome news, even though many people will be slow to believe it. Remember that the market cycle tells us what emotion follows despair - it is skepticism. 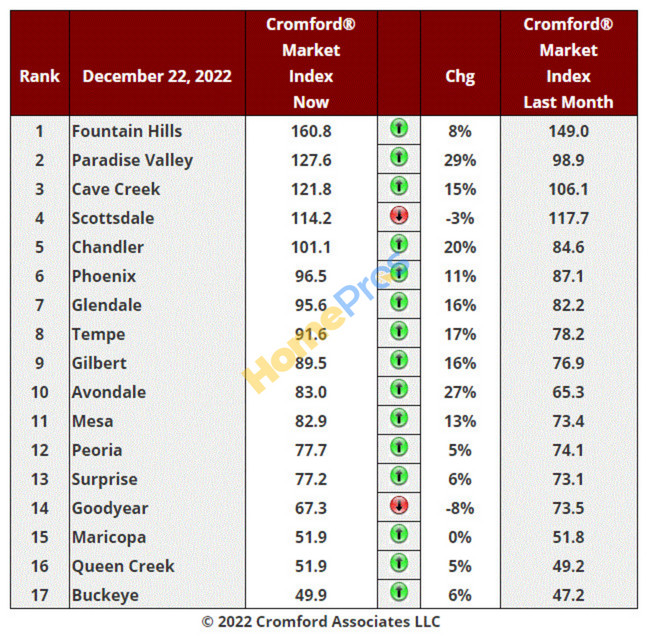 Most of this improving trend is due to declining supply, which in turn is caused by the very low arrival rate of new listings. Demand remains pretty weak, but is starting to show a few signs of life now that mortgage rates have dropped well below the peak reached in November.

10 of the cities remain in the buyer's market zone below 90, but Glendale, Chandler and importantly, Phoenix are all in the balanced zone between 90 and 110. 4 cities are seller's markets.

This is table to bring a morsel of seasonal joy to market observers. 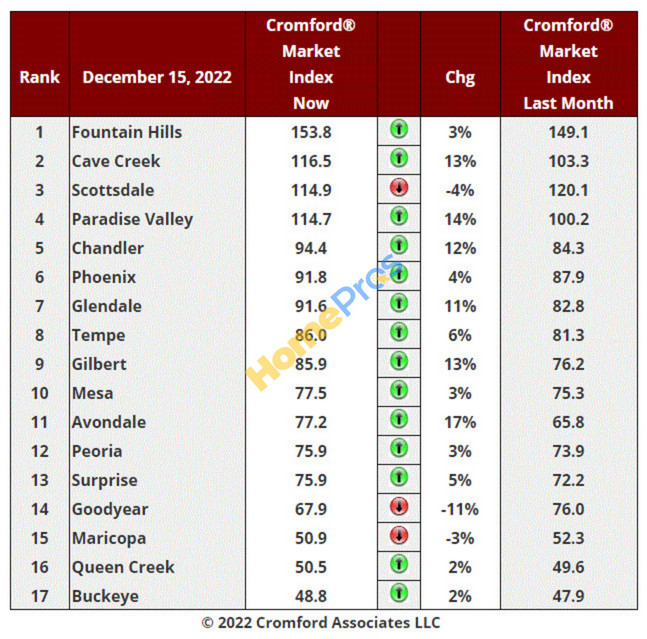 Dec 8 - We now have 7 cities that have improved for sellers over the past month. Chandler, Peoria and Avondale being the latest to join this group.

Over the past week, most cities have seen increases in their CMI, including:

The only cities to decline during the past week have been:

We can safely say that this trend is due to declining supply. Demand remains weak, but with many interest rates down as much as 0.75% from their peak some optimism can be justified that demand is establishing a base and could rise once again in the new year. 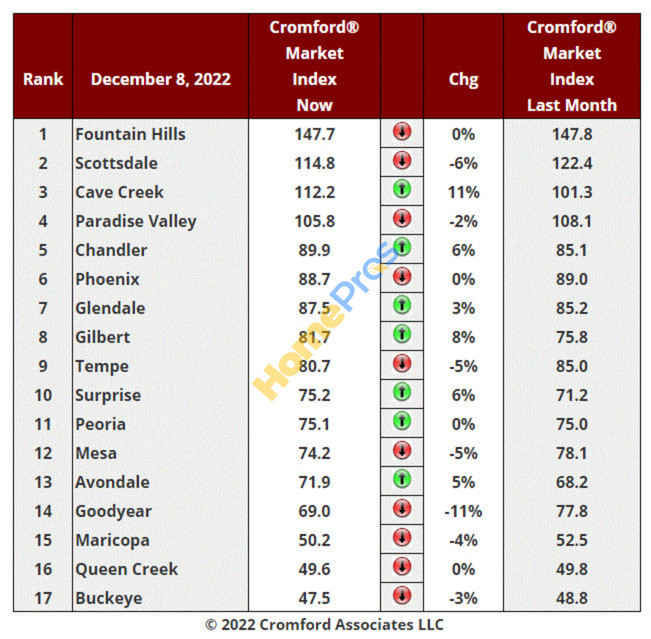 Dec 1 - Twice as many cities are in the green zone this week with Fountain Hills and Gilbert joining Cave Creek and Surprise in showing an improving environment for sellers over the past month. The other 13 cities have deteriorated for sellers over the last month, but many of them have recently changed direction. Improving over the last week are: Avondale, Glendale, Paradise Valley, Peoria and Tempe. This leaves only 8 of the 17 cities still moving in buyers' direction. The previous deterioration for sellers is continuing to decelerate with an average change in CMI of -4.3%, a big improvement over -7.8% last week.

Confirming this positive trend we see that the overall CMI has turned around, having bottomed out at 88 on Tuesday and has starting to rise again over the last 2 days. 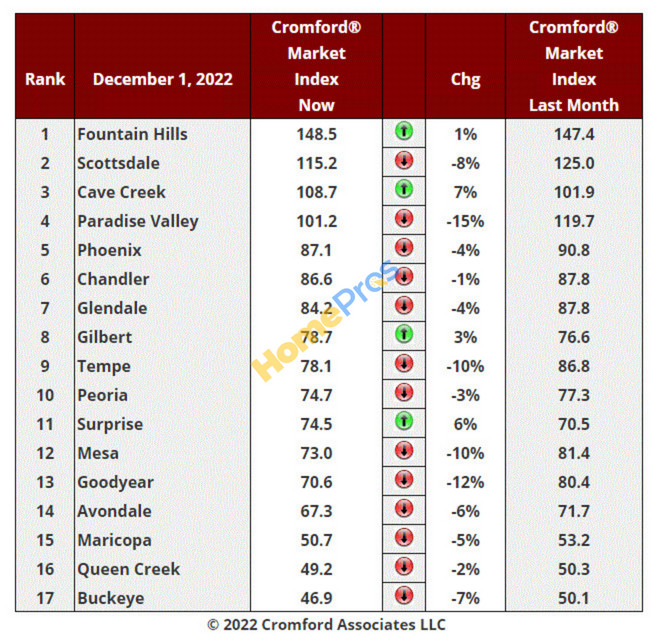 Nov 24 - Cave Creek has joined Surprise in showing an improving environment for sellers over the past month. The other 15 cities have deteriorated for sellers over the last month, but there are numerous signs that the situation is starting to improve gradually over the last 2 weeks. Paradise Valley declined 27% but almost all of this occurred 2 to 4 weeks ago and in the last four days, Paradise Valley's CMI has changed direction and looks to be headed back over 100 again.

The overall deterioration for sellers is starting to decelerate with an average change in CMI of -7.8%, an improvement over -9.8% last week.

With supply now dropping faster than demand, the next 4 weeks will probably show us more signs of stability becoming established. 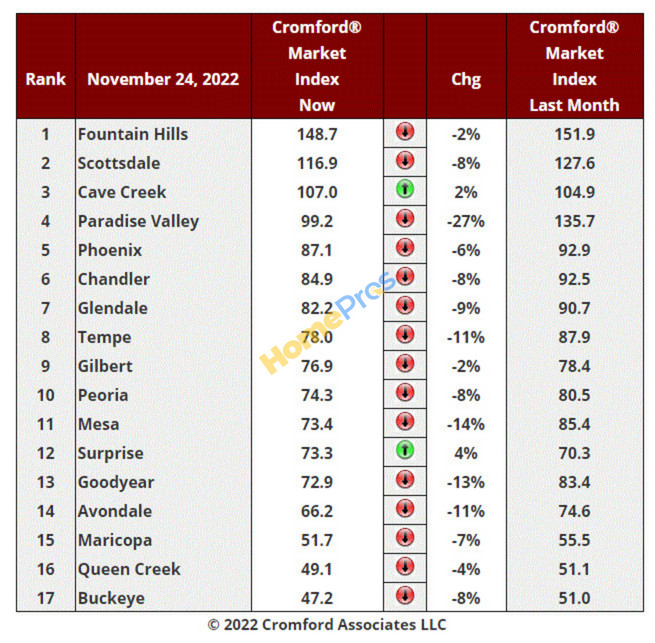 Nov 17 - Surprise is living up to its name by delivering a 3% improvement in its CMI over the past month. The other 16 cities, not so much. Paradise Valley declined 34% and appears to be rapidly heading towards a buyer's market. However the decline has slowed over the last week and it may yet stay in the balanced zone instead. Fountain Hills is now in a league of its own and only declined 3% over the last month. Conditions there have started to improve. Cave Creek is also pulling out of its decline and may see stability in the balanced zone pretty soon.

The deterioration for sellers is starting to decelerate with an average change in CMI of -9.8%, an improvement over -10.8% last week. Gilbert is one area where prospects for sellers and starting to improve slightly as supply declines.

Some of the secondary cities are also starting to improve, including Laveen and Tolleson. 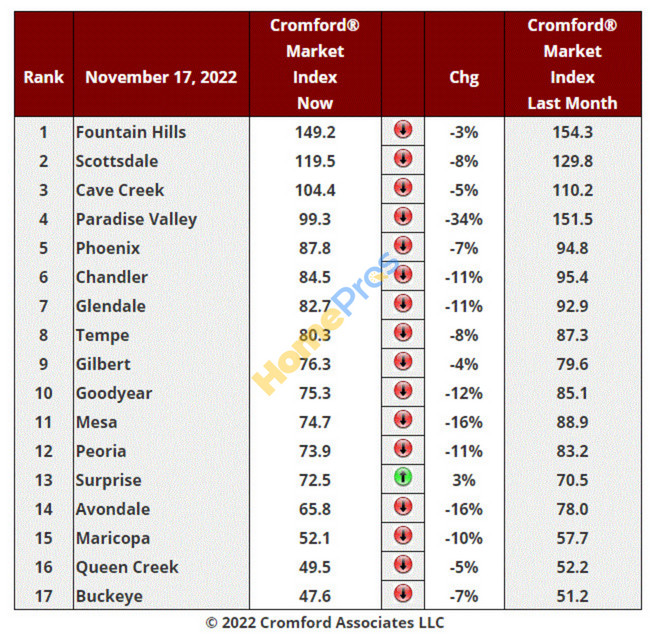 " Thank you so much Josh for all your help, from beginning to end. We will definitely keep you in mind for our next chapter. Martin and I appreciate you! "

" Thank you for everything Josh, I really appreciate what you have done and contributed towards us getting this house .... and keep in touch. "

" Great company, especially the Real estate Josh , He very helpful and patient with us and you will always find him when you want to see any home Thank you Josh Kasan ~Google Review "

" Joshua was always available to answer all our questions! He was very transparent, professional and absolutely wonderful to work with! Couldn’t have asked for a better person to help us find our home, thanks again for a wonderful experience. ~Google Review "